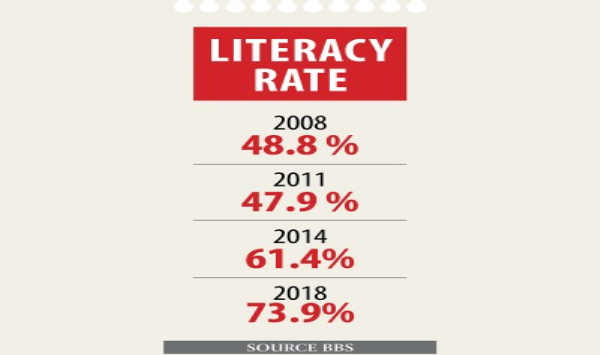 Around 26 percent of adults in Bangladesh are still illiterate though the ruling Awami League in its 2008 election manifesto had promised to eradicate illiteracy from the country by 2014.

The National Education Policy 2010, framed by the AL-led government in 2009, also set a similar target of ensuring 100 percent literacy by the same timeframe.

But the literacy rate for people aged 15 and above stands at 73.9 percent, shows Bangladesh Sample Vital Statistics 2018 released by Bangladesh Bureau of Statistics in May.

The rate was 48.8 percent among the same age group in 2008, according to BBS Literacy Assessment Survey 2008.

Educationists have blamed absence of proper planning, lack of will and financing as well as incapacity of implementing agency Bureau of Non-Formal Education (BNFE) for the failure to eradicate illiteracy.