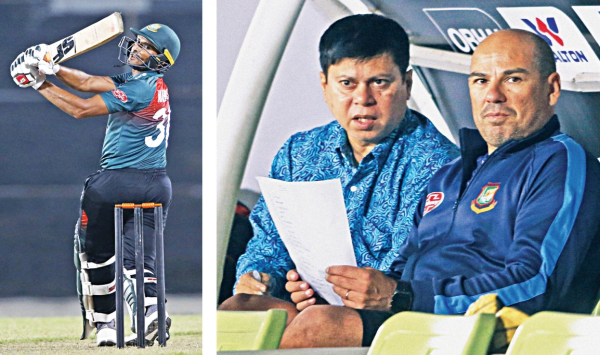 The stunned faces of chief selector Minhajul Abedin and head coach Russell Domingo (R) during yesterday’s practice match between Red Team and Green Team in Mirpur perhaps perfectly depicts the sentiments of BCB president Nazmul Hassan when he told The Daily Star yesterday that, ‘everything is foggy’. Initially, it was said that the Test squad for the tour of India would be announced yesterday. However, it was later learnt from cricket operations committee chairman Akram Khan that they would announce a revised T20 squad today while it would take a few more days to form the Test team, making it almost seem as if the BCB were waiting for the Shakib Al Hasan conundrum to end. Shakib did not turn up for the practice match and although Hassan was left puzzled by the star all-rounder’s absence, Akram said Shakib had taken permission from the coach to rest. However, amid all the chaos Mahmudullah Riyad (L) gained some confidence by scoring 81 runs off 51 balls during the second practice match.