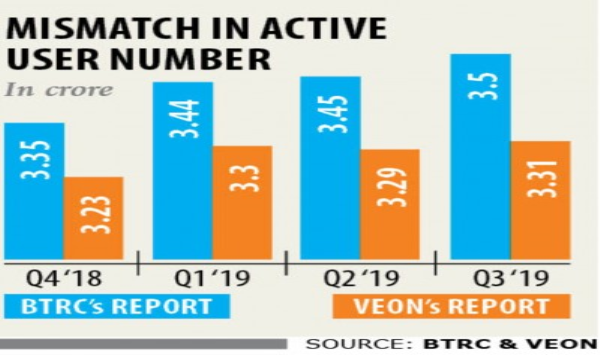 Banglalink has reported two different numbers of active subscribers in two separate reports—one submitted to the telecom regulator and the other to its parent company—with one being 5.77 percent higher than the other.

The third-largest mobile carrier in Bangladesh had a gap of 19.10 lakh active customers in the third quarter this year when the two reports are compared.

As of September, the number of Banglalink’s active users stood at 3.50 crore, according to the Bangladesh Telecommunication Regulatory Commission (BTRC). However, Banglalink’s parent company Veon reported the operator had 3.31 crore users at the end of the third quarter.

Both the reports were published yesterday.

“Veon’s calculation of customer number is slightly different from the one done locally,” said Taimur Rahman, chief corporate and regulatory affairs officer at Banglalink, while explaining the gap.