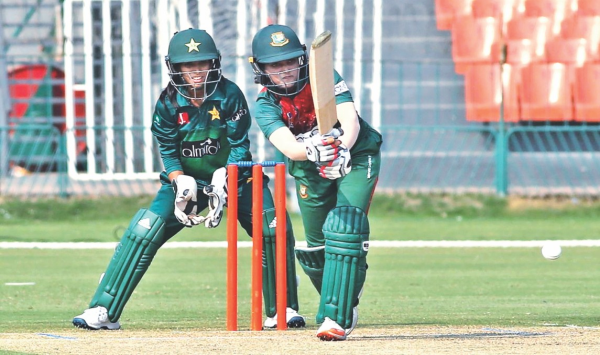 Following in the footsteps of the men’s team, who clinched their first-ever T20I win over India on Sunday, the Bangladesh national women’s team registered their maiden victory over Pakistan at the Gaddafi Stadium in Lahore yesterday.

The Tigresses sealed a nail-biting one-wicket win with just one ball to spare in the second of a two match ODI series, which the sides drew 1-1. The first ODI saw the hosts pull off a 29-run win against Bangladesh.

In chase of a challenging 211-run target, Bangladesh needed three runs to win off the last over with just one wicket in hand but Jahanara Alam and Nahida Akter stayed strong to ensure a memorable victory over their Pakistani counterparts.

Bangladesh made a steady start to their innings with Sharmin Sultana being the first to depart on 27. Fargana Hoque and opener Murshida Kahtun then added a valuable 82-run stand for the third wicket before the latter departed on 44 runs of 67 balls, which featured six fours.

Player-of-the-match and also the series, Fargana, strung together another valuable 57-run partnership with skipper Rumana Ahmed for the fourth wicket. Rumana was eventually forced to return to the dressing room with 31 runs.